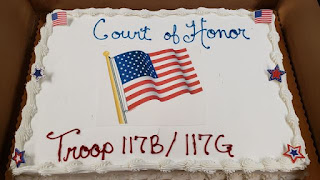 Troop 117G, the first Elmhurst-based girl troop of Scouts BSA program of Boys Scouts of America, has now reached 20 members since it was started on February 1, 2019. Troop 117G is tied for first with Troop 1505 in Three Fires Council for girl troop with the most members. A troop in Cincinnati, OH has the most girls in the Central Region of BSA with 36 members.

Troop 117G, which is the sister troop to Troop 117B chartered at Christ United Methodist Church in South Elmhurst, opened their charter with 10 members back in February.

“We have attracted girls from around the area to our troop,” said John Lothian, Scoutmaster of Troop 117G. “Our commitment to a youth-led troop has resonated with families looking for a troop where their daughters can have similar experiences as their sons, who also may be in Scouts.”

Scouts from Troop 117G and 117B are headed to summer camp for a week at Camp Freeland Leslie in Oxford, Wisconsin.  The girls of 117G will have 9 Scouts attending in their first year as official members of Scouts BSA. The boys of 117B are bringing 10 Scouts in their separate patrols.

One member of Troop 117G is signed up for three different summer camps, as she attempts to become an Eagle Scout in the first class of girls to make that rank next Fall.

Two girls from 117G participated in a week-long National Youth Leadership Training camp at Owasippe Scout Reservation after receiving a fully-paid scholarship from the Fearless Girl National Youth Leadership Training Fund of the Pathway to Adventure Council of the Boy Scouts of America. Owasippe is the oldest Scout camp in the U.S. and is owned and operated by the Pathway to Adventure Council.

"Boy Scouts has always been a wonderful program for our boys to learn life and leadership skills,” said John Fabry, Committee Chair of Troop 117G, Troop 117B (for 10 years) and Venture Crew 711. “We are glad that we can now extend this opportunity to girls in our communities. There is a lot of excitement in our new troop as each of our girls determines how they want to approach the path to Eagle Scout."

Troop 117G was created from members of Exploring Club #1, which was established in 2017 to teach the girls the same first class trail lessons that boys would learn at the same age. Now the girls, as members of Scouts BSA (formerly Boy Scouts), can earn the ranks by completing the requirements.

Some members of Troop 117G are also members of Venture Crew 711 or Crew 57, which is a Scouting program for older boys and girls ages 14-20.

More information about Troops 117G and 117B is available on the www.ElmhurstScouts.org website.